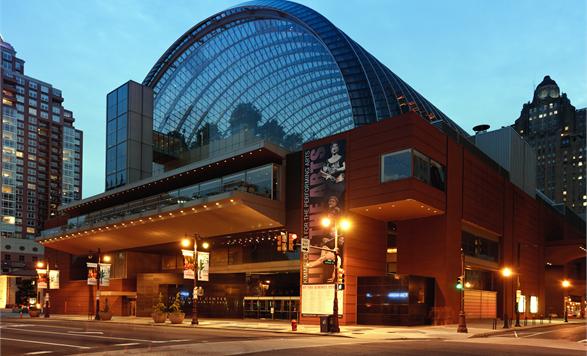 City Context and Exterior Façade:  A city known not only for its pre-eminent orchestral and operatic organizations, but also for architectural significance, Philadelphia constituents required the new performing arts venue to continue an illustrious tradition.   Located on the “Avenue of the Arts,” the Kimmel Center is a modern façade surrounded by turn-of-the century buildings that have near monumental status in terms of the city’s history. The approach is not processional and therefore the requirement to elicit visual impact and recognition within the established context of the historical boulevard becomes a design issue. In other words, how does one stand out and blend in at the same time. I believe Vinoly accomplished this effectively. To the north are the Atlantic Building and the Merriam Theater; to the south is the neo-classical Academy of the Arts administrative building. An incorporation of details found in the surrounding buildings is evident: the arched atrium reflects Merriam’s roof-line, tonalities of exterior building materials match the flanking facades, and a sense of verticality, whether created by windows or other structural elements, mirrors similar elements found in the vicinity. It is interesting to note that Academy of Music, the third building to the north, is the original venue and still considered part of the complex, however, the integrating elements shared by the Atlantic Building and Merriam Theater with the Kimmel Center are far the stronger than those found on the Academy of Music structure. Site requirements demand the front façade be the narrower side of the structure and, therefore, the size of the Center within the context of the surrounding environment is consistent and relational to the other buildings. It is within the space, that the sense of grandeur communicated through size unfolds. Vinoly has created a structure that “blends into” the environment visually, but “stands out” in physical experience. 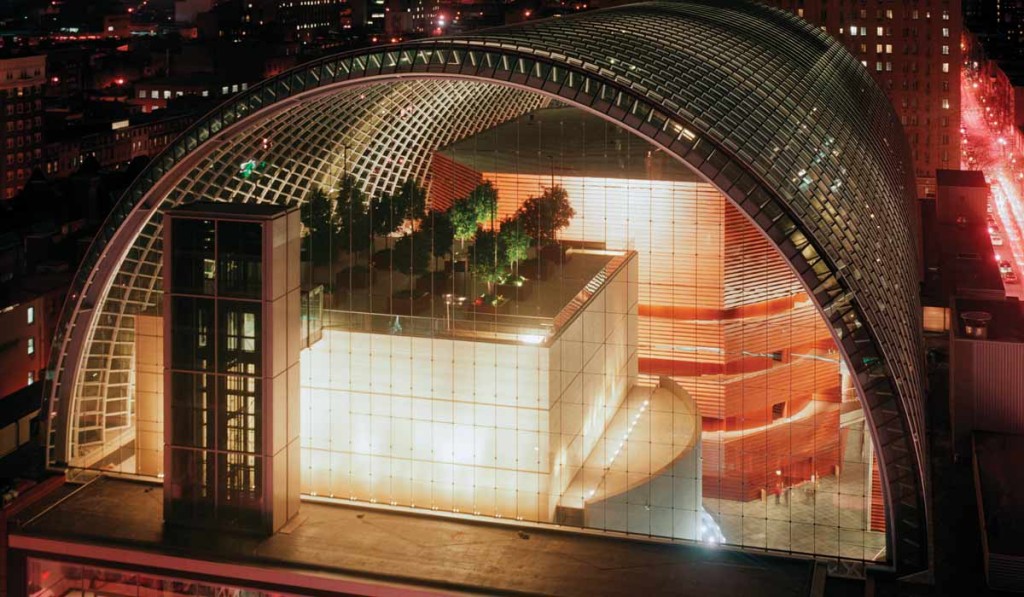 It is with the exterior façade, Vinoly establishes his vocabulary. The atrium enclosure is the dominant feature of both the façade and the interior and gives visual hierarchy to the Center in relation to the other buildings on the street. The garden effect, introduced by the atrium, is communicated to the exterior by the view of the roof garden atop Perelman Theater. The architect is quoted to have been inspired by the many parks within the center city urban structure and wanted to reflect the same commitment in the Center’s aesthetic. Datum is organized in repeating horizontal lines within defined rectilinear planes, but the scale is varied lending geometric playfulness. Looking from the front curtain of the atrium to the ridges found on the exterior wall; from the elevator shaft to the entrance doors, the “louvered” effects vary not only in material (wood, mortar, glass), but also in density (narrow bands, wide panels). The juxtaposition of several rounded elements in a field of strong rectilinear geometry, such as the stone wall at the entry and the canopies on the north side, increase visual interest.

Entrance Plaza:  The interior of the Kimmel Center is a complex of two distinct, free standing auditoriums enclosed within a glass structure. One is reminded of the domed communities presented in the 1970’s as the inevitable outcome of pollution, nuclear holocaust, or outers-pace living. The atrium serves as a unifier of the space and provides a garden-like atmosphere for the support areas such as the box office, donor rooms, retailer, food vendors and administration. The traditional axial symmetry is hidden by an asymmetrical feeling of rotation through the use of diagonal flooring and flattened corners or curved facades of the performance halls in relations to the entry and main reception area (or Plaza), as well as, the vault panels of the glass atrium rotated off-axis. The glass plays a dominant role as the visitor is drawn into the space by looking up as well as forward.

Each performance hall has a façade of different material, with the hierarchy of the subordinate hall emphasized by the more modest materials employed, such as corrugated steel. Datum in the Plaza is subtle, achieved by the louvered exterior embellishment of main auditorium, the grout lines of the stone floor and of course the curtain wall supports of the front facade panel. There are sight lines to most major activity centers, such as restaurants, retail spaces and the roof garden. Signage, however, is practically non-existent, which maintains an artistic integrity, but makes it very difficult to navigate the space beyond the box office and information center. Restrooms, water fountains and coat check are not clearly delineated, and for the first time visitor, necessitates a verbal enquiry for locations.

The atrium which provides a significant grandeur to the spaces also makes sound, light and climatization severe issues in the Plaza. When an informal concert is being on the Plaza Stage, music masks the otherwise acoustically overactive space. Echoes rebound; only a slight crowd creates an almost overwhelming atmosphere, one feels “battered” by the noise. Sunlight is capricious; casting shadows over the café and/or blinding those at the Information Center. They are often found with wearing sunglasses to mitigate the glare. Fortunately, the wood chosen for the hall’s exterior is a tropical Makore and therefore, resistant to UV damage. In spring, summer and fall the rooftop garden is insufferably hot, while the ground level remains comfortable. In the winter, the situation reverses. A small number of panels open at the top of the atrium, but they are not enough to ameliorate the solar effect. 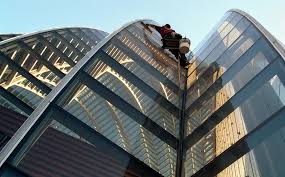 The Center is not maintenance “friendly” and therefore requires substantial expenditures to clean and repair. The atrium glass must be cleaned by a special team of trained mountaineers able to hang from the structure as they wash the windows. The louvered exterior of Verizon Hall must also be dusted. Since budget only allows a “once a year” dusting, the façade is clean only a short time. The stone flooring is easier to maintain and wears better than carpet, although it reverberates noise to a level of cacophony. 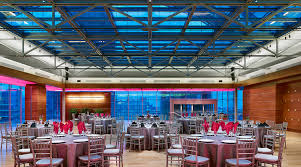 The retail and restaurant spaces of the Center are well placed, sustaining a dramatic ambience and connection to the exterior. With a view to the exterior from the window wall facing Spruce St., the retail shop is a well-lit, inviting space. The Cadence Restaurant is on the second floor and has an outside terrace, facing Broad St. One can experience the drama and excitement of attending the concert crowd while dining. Intermission congestion is often a problem in the refreshment area as patrons try to buy drinks in a short time frame. The Peco Café, located between the two performance halls, has a large space and multiple serving stations to accommodate a crowd quickly. 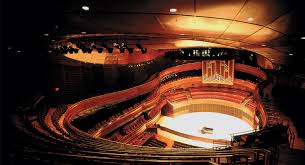 Performance Spaces:  Each auditorium follows the traditional design of a rectangle (in this case, cello shaped) within a rectangle. Verizon Hall, the largest auditorium with a seating capacity of 2500, has reverberation chambers running down the two longest sides, allowing sound control through the movement of computerized doors. The use of these chambers, an idea first implemented in the mid 1990’s, provides an amelioration of the weakened sound reflection experienced in a more fan shaped hall. As a relatively new technology, the chambers have required continual experimentation in “tuning” the auditorium space. The ceiling is a movable canopy, comprised of lighting equipment and rings that can be raised or lowered for acoustical enhancement. The audience space is not acoustically active (it has a distinctly muffled tone in the upper balconies) and the sound attenuation provided by the rubber foundation pads effectively block street and subway noise from entering the auditorium. Acoustical evaluations of the hall have elicited mixed results. The goal of any hall acoustically is the integrity of sound throughout, independent of the listeners place in the audience. This has not been achieved at Verizon Hall. Even after two years, the reverberating sound is still too short and the strings require fuller amplification. [1] Reports indicate sound is better at the balcony and/or loge level and somewhat deadened on the orchestra level. Unfortunately, that leaves the most expensive seats in the auditorium as the least effective acoustically.

A constrained richness characterizes the interior of the hall. There is an intimacy here I have not experienced in other venues of similar size. Deep, soft colors are used in various textures such as the wood paneling or plush fabric, while the curves of the side box facades give visual representation to waves of sound. The floor of the stage is wood as well, but lighter in tone, creating an appropriate focal point for the orchestra. The pipes to the partially installed organ are a dramatic visual addition, drawing the eye not only to the stage, but upwards, much as a presidium would on a traditional stage. All these characteristics serve to emphasize the optimal concert experience, communicating an individually focused calm through an amplified sense of envelopment.

Perelman Theater which seats 650 is a more intimate venue intended for varied use. The visual hierarchy introduced on the exterior continues into the interior. The space is lighter (pale wood tones), less enveloping (no undulating facades), more active (rotating stage). It has a fly space, but can also effectively host small orchestral ensembles such as chamber orchestras or the “Philly Pops.” Unlike in Verizon Hall, the feeling of intimacy is communicated through a smaller size and less formal design elements. The French word to attend a concert is “assister,” implying the patron has as much responsibility to “participate” in the performance as the performer. With the wrapped seating of the hall, the audience is drawn into and therefore participates more with the events on stage.

Aesthetically, the Kimmel succeeds in providing a pleasing vocabulary, connected to the surrounding environment while offering visual impact. For me, the Center successfully “stands out as it blends in.” Modern elements feel traditional in application, blending the time honored tradition of classical music with a future perspective of a culture moving to the 21st centruy. However, the Center does not effectively respond to those common problems found in large public spaces: sound control, climatization and signage. In fact, it succumbs to most of the cliché problems one would hope could be recognized and new architectural solutions would be provided.