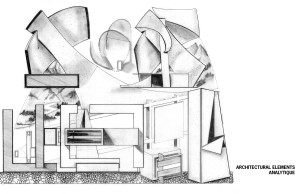 When you matriculate in a graduate program for design, you take every class with the same 20 or so students that entered the program at the same time as you.   Needless to say, after three years and multiple projects you get to know one another pretty well. You learn what are the different design attitudes, the preferred aesthetics of each, those who work hard and those who don’t. Each of my classmates possessed talent in excess and had mastered a myriad of skills even before they began the program. Superior space plans, exquisite renderings and creative material selections shone from project boards every semester.   For some, concept studio proved a challenge, for others it became foundational to their future work.   The class, taught by Professor Virginia Ellis, focused on the process of conception, a mental imaging methodology that enhances abstract thinking about objects or processes.

Many believe our world began when order outflanked chaos, that the formless primeval matter predating creation took functional shape through an act of willful organization. No matter the truth of universal origins, evidence that humanity continues to find crafting order from chaos an essential activity surrounds us to such a degree that it leads one to believe that perhaps it is not only exquisitely satisfying but also a necessary and primordial endeavor. From the physicality of structural dwellings to the concepts of social freedom and equality, “designers” have created our world, using unique languages that communicate ideas symbolically. The irony lies in the change order. Whereas the universe began physically and evolved to mentality, design begins with a concept that produces a physical reality. It makes the designer or the writer or the inventor, in essence, conceptualists, organizing ideas that lead to an ordered environment.

Conception is the beginning, at the intersection of imagination and application. Properly employed, the concept organizes ideas, corrals decision-making and allows coherent and cohesive ideas to reach fruition. Some may call it a notion of things, but it is something more. Deeper than a theme, broader than one product or outcome and definitely more abstract than the spaces it generates, concepts spark a universal order through the definition of elemental relationships. Whether writing a book, designing a space or starting an enterprise, I use a concept as the written root of invention. It is the source as well as the method; it serves the knowledge as well as the process.   It becomes the map that everyone involved in the design process uses to discover the solution, whether for product development, eloquent prose, or problematic existing conditions.

But Alice, all may not be well in Wonderland. Concepts are not always easy partners. Often elusive to define and difficult to administer, they require diligent application before their true efficacy can be realized. The chair of the department where I received my Masters would chastise us on a weekly basis, “No design decision is arbitrary,” meaning a designer doesn’t choose elements, or a writer words ,because we think they are beautiful individually. Our job is to choose those things that will make the project integrated and seamless, as if it is made of only one, not a multiplicity of elements or choices.   Therein lies the power of a persistently employed concept. With the myriad of choices any design endeavor requires, temptation is our nemesis.  Even as a committed devotee, I have often been tempted to abandon my concept for the proverbial “carrot.” A particularly witty phrase or an exceptionally stunning staircase, as independent options, shines out; I want to hold onto them as if they were my soul’s children. But I have found that when used to drive a project these arbitrary choices often lead to confusion at best or a full-blown schizophrenic outcome at worst. I had a client once who claimed she sought an eclectic mix for her home, freely choosing period, shapes and textures, driven only by objects or shapes she liked, not by any conceptual idea.   The result, for me, was definitely not eclecticism, but visual cacophony.

Concepts are not about matching things, such as words on a page or elements within a space, but about matching ideas.  When used effectively, this powerful tool allows the creative process to reach the most pleasing outcome possible. 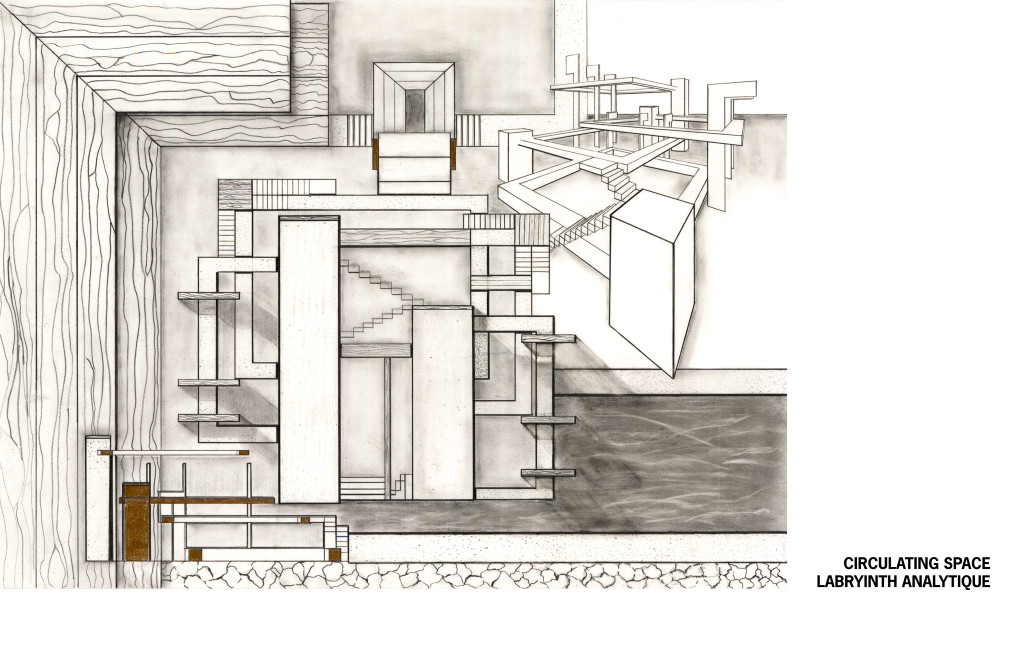 Environmental systems used to generate space – vista, sound, water and wind – create a spatial dynamic organized by the strength of a central element. A continuously unfolding panorama, which changes with the point of view, shifting boundaries and rhythmic movement defines the space.

As much a work of art as a useful compositional tool, the “analytique” is a picture that expresses a building or structure through a synthesis of various views at a variety of scales.  The origin of the analytique, and its role in the construing of architecture, can be traced back to the technique of graphic representation and composition developed by Giambattista Piranesi (1720-1778) and portrayed most cogently in his survey etchings of Roman architecture found in his publication Della Magnificenza de Architettura de’ Roman.  Known more for his exquisite drawings of ancient Roman structures than any architecture he designed, Piranesi recreated in exacting detail the ruins of Roman antiquity, adding his own interpretation of the missing elements to the ruin’s reality.  His work was carried forward by his son and a number of his pupils, preserving a unique and powerful reflection of a defunct, but illustrious, civilization.

In the Beaux Arts tradition of the late 19th and early 20th century, an analytique evolved into the format most often seen today, a graphic representation of the designed or surveyed building where the details play the predominant role. Perspectival layers, composed in different scales, attempt to single out the dialogue among the parts, creating a text of the building.  A scaled hierarchy of elements begins with the structure’s detail renderings as the closest element to the viewer and continues with other architectural drawings such as plans, elevations, sections, etc., each moving visually farther back from the foreground.  Sometimes the building as a whole is present in the drawing, but if it is included, it is generally represented at a minuscule scale, making it appear a detail among details.

Although a common tool used for the instruction of architectural students, analytiques are also works of artistic beauty.  Whether created in the traditional manner by hand or computer generated with 3D software, the drawings unite scale, texture, and form into a visual richness, inviting the viewer into and throughout the space depicted.